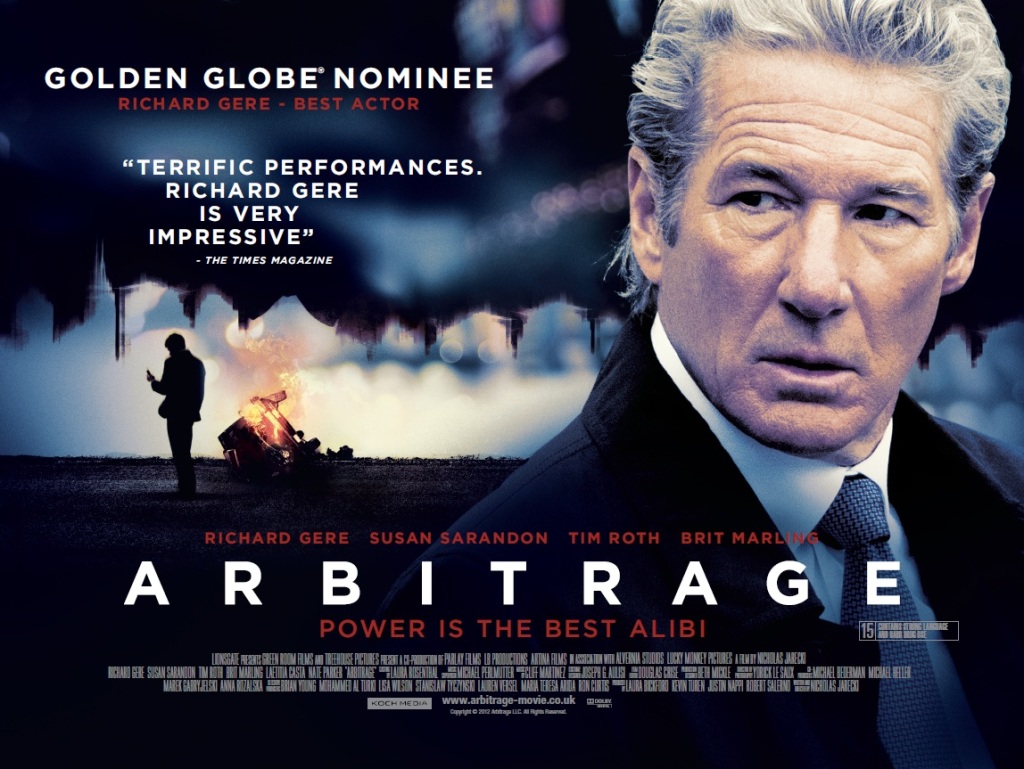 Note to pretty young things “dating” older, wealthier married men: they never leave their wives. There’s too much money, and mess, involved in the process. And there’s always another pretty young thing in the wings.

That is, if prison doesn’t intervene.

Robert Miller (Richard Gere) is a very wealthy hedge-fund manager trying to close a merger deal with a big bank. There’s some iffy math on some of Miller’s books — as in half of the assets of the funds he manages are “missing.” If the deal collapses, so does his business, and fortune. It all depends on faking it through an audit.

As if that wasn’t enough to elevate his diastolic, Miller is having an affair with a young French gallery owner. Julie Cote (Laetitia Casta) is becoming increasingly demanding, and desperate to get more of a commitment from Mr. Miller.

One night, a night very important to Ms. Cote and her burgeoning artistic career, the furtive relationship takes a turn for the worse, like into a guard rail. She is killed in the accident (quite gruesomely depicted), with Miller drunk and driving. Now what does he do? He has a very public bit of business to conduct, and a dead mistress in his car.

He does what every rich, well-connected man does.

He tries to cover it up.

Well, as you might expect, a would-be Columbo enters the scene, Det. Michael Bryer (Tim Roth). After investigating the scene of the accident, he realizes that something is afoot — namely, that someone appears to have kicked out one of the car doors before the entire vehicle exploded in a ball of flame. And it certainly wasn’t the dead woman.

There’s also the fact that Miller invested in the deceased’s art gallery. Why did he do that?

Bryer catches on early that Miller was the driver. He also knows that someone had to have driven the billionaire sleazebag away from the scene of the accident. A little cellphone-record investigation and they find Jimmy, a young African-American man with something of a record who picked up the phone at 2 am and came to Miller’s aid.

Will Jimmy (Nate Parker) talk if his Johnnie Cochran of a high-priced civil-rights lawyer (paid for by Miller) can’t keep him out of jail for obstruction of justice — or complicity?

Will Miller’s apparently long-suffering and somewhat spoiled wife (Susan Sarandon) stand by her man in his time of need, even though she has endured many an affair? Or is this an opportunity to negotiate a deal of her own?

Will Miller’s daughter (Brit Marling), who also happens to be his colleague and who has learned of the misappropriation of funds, lose all faith in her father, and in the business she is dedicating her life to?

Will the man who is fronting Miller a ton of money necessary to do the bank deal back out at the last minute?

Will I start to give a flying fig about any of these people any time soon?

I caught this on Verizon Fios On Demand rather than in the theater. Saved me money. And time on the train to Philly. The film is professionally executed. And by that I mean pure paint by numbers. From the setup to the climax to the denouement. Even the emotions are utterly Julliard 101. And the message may as well have appeared as a crawl at the bottom of the screen: the one percenters are scum, even as they disguise themselves as philanthropists and patriarchs — rivers to their people.

Roth has developed these strange tics as an actor, as if he’s channeling someone doing an imitation of Robert DeNiro circa 1980, with the tilt of the head and the squint of the eyes and clauses spit between teeth and tongue, nasal cavity shut.

Nate Parker may be going places, though. While I didn’t quite buy the pained conscience Jimmy evinces when Miller offers him $2 million — supposedly a way to keep a promise to Jimmy’s father, Miller’s former driver, to look after the young troubled kid, but really a form of hush money — the actor is able to shift emotional gears with impressive alacrity, intensity, and sincerity, and reminded me of a young Denzel Washington, or for that matter, Edward Norton.

Gere is a low-rent Gordon Gekko, for whom greed is not only good but God. He rationalizes his personal corruption, of course. These international deals playing with other people’s money are not so much zero-sum games, as it was for Gekko, but a means to flood his world with so much money that all boats in his fleet will rise and sail into the sunset happily ever after. Alas, there is nothing particularly exciting or fresh about Gere’s approach to his character, which, to be generous, is two dimensional, one dimension of which is half his performance from the much superior Primal Fear (in which he costarred with a young Edward Norton, who stole the film).

For the life of me I don’t understand what Susan Sarandon saw here. Her role is so far beneath her talents that one is left dumbfounded. Is this the best she’s being offered — whiny, vengeful cheated-on wives?

Miller: The world is cold.

Mrs. Miller: Then you’re going to need a warm coat.

You’re going to need a Pepto-Bismol if you pay to see Arbitrage. Catch it on an airplane. It’s not bad. It’s just not anything in particular.