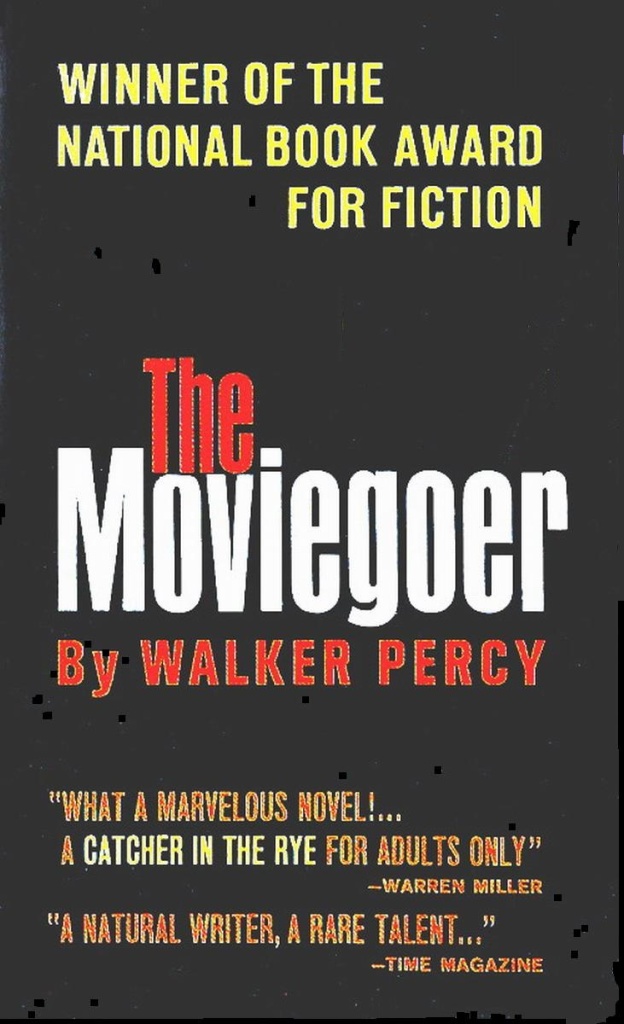 Frankly, it’s not my favorite of his books. You might think it would be, my being a moviegoer and all. I much prefer Love in the Ruins. And yet, The Moviegoer set Percy, the would-be physician, off on a long and illustrious career — after it beat out Catch-22 for the National Book Award in 1962.

How on earth did it do that? Well, you see, it’s like this:

The day after the awards ceremony Liebling told a gathering at Columbia University The Moviegoer “got in by the sheerest chance.” Percy’s victory, it turned out, could be traced to a single morning. On May 28, 1961 Liebling was paging through the New York Times. He had just completed a book about Earl Long, the conservative, erratic governor of Louisiana, brother of Huey, and with his mind still on that state, Liebling paused over a review that began, “Every night at dusk, when the Gulf breeze stirs the warm, heavy air over New Orleans, a 29-year-old wanderer named Binx Bolling emerges from his apartment, carrying in his hand the movie page of his newspaper, his telephone book and a map of the city.” Liebling went out and bought the book under discussion: The Moviegoer. Later he recommended it to his wife, the novelist Jean Stafford, who happened to sit on the National Book Awards fiction jury.

Liebling had a Falstaffian presence, was fat and jowly, brilliant and egoistic. He wanted in this context to be seen as a crusader for justice. Knopf, he told the audience at Columbia, had failed in its promotion of The Moviegoer. Without A.J. Liebling, one was left to presume, a masterpiece may have been forever lost to posterity. But there was more to the story: A decade before, Knopf had published Liebling’s book Chicago: The Second City, and Liebling had never forgiven Knopf for not pushing the book vigorously enough. Now, given the opportunity to embarrass his old publisher for failing to champion Percy’s text, he did not hesitate to put the boot in.

Knopf — publisher of The Moviegoer, mind — was outraged that his own title had won, and ostensibly due to the connivance of a disgruntled ex-author. And so he struck back by sending journalist Gay Talese to sniff out the backroom bargaining. Talese then wrote a story of last-minute arm-twisting that embarrassed Liebling, his wife, and the award committee. But:

Herbert Gold, a novelist who was also a member of the fiction jury that year, confirms Stafford’s description. Talese’s report, he says, “is complete bullshit. The fact was I loved The Moviegoer. I went to New York with that book under my arm hoping to convince the other two judges. But I can’t claim credit because Jean also loved the book.” The third judge, Lewis Gannett, a columnist for the New York Herald Tribune, was reportedly happy to comply. In fact, according to Gold, Gannett was not on intimate terms with the books on the short list. “My wife liked that one” was about all he could muster in response to some, and The Moviegoer won unanimously on the first ballot.

Talese stands by his story, and Percy went on to prove himself a writer of merit (and a favorite among Catholics and other Christian types who marvel at how he manages to weave his Christian worldview into often bleak works).

Publishing is a jungle.