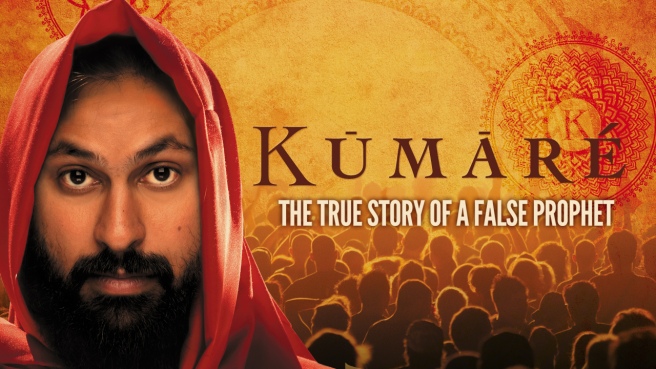 So this guy from New Jersey, Vikram Gandhi, was rather frustrated in his quest for spiritual truth, for enlightenment. Raised in a Hindu household, he found the gurus he consulted to be less than edifying. And yet, some people seemed to find an inner peace by means of certain exercises and while sitting under the teaching of a spiritual master.

So Gandhi decided to become a guru and get inside the phenomenon that way.

And Kumare was born — as the subtitle of the film relates, a false prophet.

Was this prank a mere swipe at people’s gullibility, at how little the actual content of “spiritual” teaching mattered as much as the persuasiveness, the seductiveness, of spiritual “authority”?

Or was this an attempt to learn something about his own latent “spiritual” powers, to find genuine enlightenment by entering through the back door, so to speak? In other words, was Gandhi trying to understand the nature of spiritual conduits — or merely to teach a bunch of pampered American New Age ninnies a lesson?

Kumare’s chants are gibberish, his precepts merely what people want to hear (or perhaps need to hear). He’s got an infectious laugh, he’s gentle spirited, and perhaps most important of all — he’s a good listener. He even repeatedly signals that what he is doing is all an act, a performance, that “Kumare” is merely an external manifestation of a much different inner reality, to the amusement of his listeners.

Kumare manages to pull together a core group of 14 middle-class disciples in Phoenix, all of whom are taped at some point (with their knowledge) describing their experience of “Kumarism” and how they perceive their guru. To some he is an ascended master with psychic abilities; to others, an enigma. No one seems to believe that his teaching is empty of meaningful content or that he seems to be making it all up as he goes along.

In one segment, he meets up with another American guru who was featured on Dateline as running a possible cult out in the desert. What Gandhi sees in the cultists, however, is merely a group of idealistic environmentalists who decided to go full “Hobbit.” And yet, the leader of this group, some nut named Gabriel of Sedona/Urantia, admits to Kumare that he was taken up into an alien space craft only to have his memory erased — then recovered! — and that he is the only conduit to divinity. This just confirms to the filmmaker the need to expose the whole guru hustle.

When it finally comes time to come clean, to remove the mask, to reveal his own flimflam, Vikram has his followers gather in a room and by video tells them that he, too, has been on a quest — for the inner guru. He reveals in dulcet tones that the whole point of their journey with him has been to learn that they do not need him, that they do not need anyone to guide them, that they should seek their inner Kumare — as he has.

And into the room walks the inner Kumare — a now-clean-shaven Vikram Gandhi.

How does the group of disciples react? Check out the film. It was released last year and is available for streaming on Netflix. I found myself, at first, sneering at the dupes, then just feeling bad for them.

I’ll add that the group’s reaction was initially, to me, surprising. And then when I thought about it a little, I realized…not really.

All through the documentary, Gandhi attempts to rationalize his deception to the film-viewing audience. His little playacting, his version of The Love Guru, was poised to do real harm in the lives of vulnerable people. But he seems absolutely sincere in his belief that he was on a mission from the God within: to demonstrate that no one needed the “Kumares” of the world.

Color me skeptical. Filmmakers are also storytellers, and I think Mr. Gandhi had latched on to a gimmick out of which he could fashion a narrative that would make for some compelling “reality” filmmaking — a tale of how there’s one born every minute and how Americans who seek “wisdom from the East” are among the biggest suckers of them all.

In other words, Gandhi may believe he’s some kind of amateur social scientist, a seeker of truth, but I think he’s merely an Indian-American Sacha Baron Cohen, without quite the repository of talents.

And by the way, Christians should not look their nose down too far. It’s easy to condescend, and think “Oh if only they would put their trust in Christ. What need would they have of these frauds?”

But ask yourself, What is it Kumare’s disciples are looking for? To lose 70 pounds, as is the case with one woman? To find a way to de-stress from their jobs? Does Christ promise such things? I know there are Christian gurus who do. And then there are the dispensationalists, who tell a lot of hurting people that their problems are about to go away any minute now — in the Rapture. Right? Look at the EU! Look at what Russia is doing there, and Israel here, and Iraq and Iran — the Book of Revelation is coming alive right before our eyes! Just hold your breath a little longer, and those problems will disappear in the clouds, as we’re wafted away to be with Jesus as the Antichrist is let loose on earth.

4 thoughts on “A Strange Review: Kumare”