So I’d been in Delaware two and a half years before I discovered this indie bookstore in a part of town that was, err, in transition. Called Between Books, it featured sci-fi, comics, graphic novels, games (think Dungeons and Dragons type), and was a kind of community center for local geeks since the late 1970s.

I tried not to take it personally but failed.

The shop owner, Gary Schauer, who is well plugged into the underground-comics scene, promised to reopen.

Which he did — Between Books 2.0 is not far from its original location, off Philadelphia Pike, a stone’s throw from an old and desolate steel mill, a train station, 42 pizza joints, a Walgreen’s, and about four churches.

The place is smaller, and there isn’t a back room for the games tables, but Gary is selling books, trying to work through tons of old inventory at half price to make room for new and newish titles at full price.

We had a nice little chat, the owner and I. Now, if you knew me, I mean really knew me, you would be stunned to hear that I had a nice little chat with a stranger, as I barely speak to the people I know well. But books (and movies) will set me off. We lamented the state of bookselling, at least the brick-and-mortar aspect of it, and I learned the exact location of that comic book store in American Splendour, the one Joyce Brabner, Harvey Pekar‘s eventual third wife, worked in (turns out it was on Fifth and Shipley, in Downtown Wilmington).

Delaware has a strange comics history, as it was also home to Robert Crumb at one time. And Gary knows Aline, Crumb’s wife — and knew the late Harvey Pekar before he was late! (Crumb, who left America, which made him famous, for southern France, because the latter was slightly “less evil,” has refused to learn French and is working on a big new project. His last was an illustrated Book of Genesis.)

As I perused the shelves of Between Books, a couple of regulars walked in, talking comics, you know, who dies in what series; if it doesn’t have Batman in it, what’s the point; whether a certain story was told from the “aliens’ perspective”; what the story line of which novel deviated from previous contributions by the same author.

As for those shelves, guess what I found under “W”? 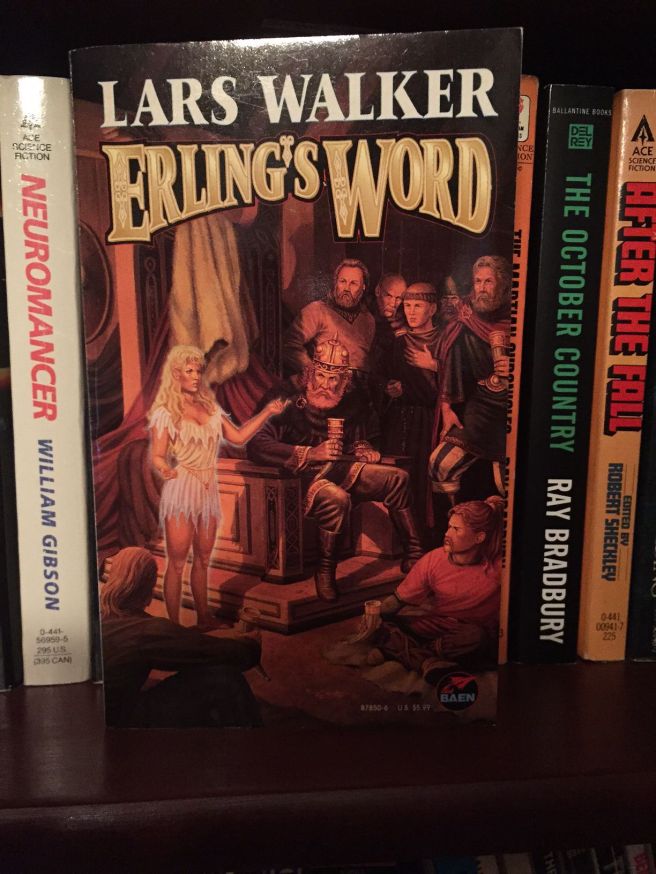 Needless to say, I bought it, along with a pristine copy of Wolf Time, as mine is a mess from frequent use. I announced proudly that I “knew” the author, Lars Walker. Gary seemed impressed, and added that the books were now long out of print, betokening some knowledge of Lars’s work.

In addition, I had grabbed Larry Correia‘s Monster Hunter International—a rare bird, as it was a self-published bestseller. Turns out Gary knows Correia and has invited him to sign books at the shop. “Very nice guy…for someone who owns a gun shop called the Fuzzy Bunny,” the owner admitted.

I almost bought John C. Wright’s The Golden Transcendence, but it was the third in a trilogy and the first two titles were nowhere in sight. I commissioned a couple of essays from Wright for the Intercollegiate Review Online, the first of which, “Hugos, Heinlein, and  Hogwash,” is the fourth or fifth most popular thing we’ve ever published. A thoroughgoing professional, in case you were wondering.

Oh, before I go: if you’re a fan of The League of Extraordinary Gentlemen, a new book is out — Nemo: River of Ghosts. As I wrote back in March, there seems to be a TV adaptation of the series in the works, which is intended to be a corrective to what many consider the calamitous movie.

Support your independent book seller, please. You know what will happen if you don’t.

Oh come on, it’s been months since I resorted to Liam, and like that ever gets old…

7 thoughts on “The Rebirth of an Indie Bookstore”