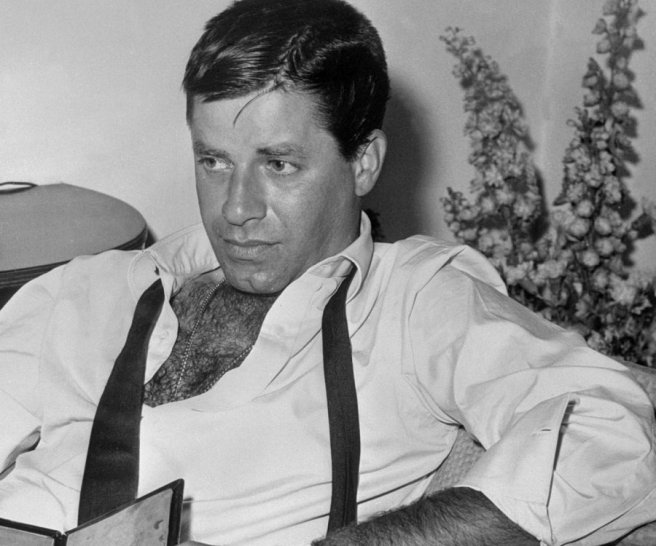 Appears so. The Muscular Dystrophy Association has severed its relationship with the 85-year-old comedy legend, who put the association on the map and deep inside people’s consciousness and who has helped raise some $2 billion for the cause.

Weird. Was Lewis too ill to perform? The man has had every ailment know to medicine, but nothing ever stopped him from hosting the Labor Day Weekend tradition. Do they want someone new, young? The two stories above contradict themselves as to whether Lewis will be replaced as host.

Lewis has received a lot of acclaim (including a Nobel Peace Prize nomination) and taken a lot of heat over his work for MDA. The whole “Jerry’s Kids” thing has rubbed some people the wrong way. All I know is, if I had a child with the disease, and MDA was able to provide some improvement in his or her condition, and that provision was a direct result of the $2 billion raised by Jerry Lewis, I couldn’t care less whether his kisser was slapped on every MDA flier, poster, or solicitation, or whether he came across as somewhat cloying and manipulative at times.

He’s a clown. Clowns do whatever to get a laugh — drop their pants, mug for the camera, fall on their ass. (Just such pratfall, off a piano, resulted in Lewis’ suffering lifelong, chronic back pain, as well as an addiction to Vicodin, Dr. House’s analgesic of choice.) So when clowns turn serious, it should be no surprise that they will prove equally shameless. But again, if it’s your kid being helped, who cares? God bless him.

Lewis is probably not long for this world. I for one will be very very sad to see him go. He has been a part of my entertainment world since I was a kid. In New York, they used to play movies on the local ABC affiliate Monday through Fridays from 4:30 to 6:00 pm. I could not wait for “Jerry Lewis Week,” which meant that I got a Lewis film five days in a row. I know, I know, it’s a running joke that only the French think he’s a genius. (And that because they’re French.) But we studied his films in film school. The Ladies Man is a great example of reflexive cinema, and at the time boasted the largest indoor set ever constructed. Lewis also pioneered the practice of videotaping takes so he could play them back immediately to determine whether he had gotten what he wanted (instead of waiting for dailies). When you’re starring in your own films, this was obviously a great aid to objectivity.

Among my favorite of his films with Dean Martin are Artists & Models (also one of Francois Truffaut’s favorite films), That’s My Boy, Hollywood or Bust, and The Stooge. Among his films solo, I especially prize the above-mentioned Ladies Man, The Nutty Professor, Who’s Minding the Store?, The Patsy, The Errand Boy, and The Bellboy (in which he pulls a Chaplin and goes silent for almost all of it).

Lewis knew how to tell a joke visually (I know this is beginning to sound like a eulogy, which I guess it is). He knew how to move both his body and the camera around a space such that the slapsticky business had a beginning, a middle, and a punchline.

I read the cover off of Arthur Marx’s Everybody Loves Somebody Sometime, a biography of the Martin-Lewis partnership and break-up, when I was, what? 14? 15? Man, Lewis did not come off well in that, while Martin was painted as a virtual Stoic, putting up with all manner of childishness and narcissism from a six-foot kid who could never get enough attention. (I remember reading somewhere that Lewis threatened to punch Marx, son of the great Groucho, if he ever saw him.) Lewis had the last laugh, though: Arthur Marx went on to become a writer on the Linda Lavin show Alice and Lewis went on to become a legend.

And when Lewis wrote his autobiography, Jerry Lewis: In Person, back in 1982, and I learned he would be doing a book tour — well! Turned out he was going to be signing copies in the Author’s Corner at the B. Dalton’s on Fifth Avenue and 53rd Street (now gone). So I queued up for what seemed an eternity to have him sign my copy of the book and for an opportunity to shake his hand. (A guy a couple of places ahead of me brought along a photo of Lewis in the early days, which the actor bought off him on the spot. I couldn’t get a good enough look at it, but it appeared to be Lewis onstage, I think with Martin, whom Lewis adored. The comic is known to have quite an extensive and well-organized collection of memorabilia from his long life and almost as long career.)

Even a short list of comics Lewis has influenced would be long. Begin by counting Billy Crystal, Jim Carrey, Eddie Murphy (who, of course, remade The Nutty Professor with Lewis’s blessing), and Paul Reiser, for starters. (Lewis’s guest appearance on Mad About You was almost as priceless as Mel Brooks’s.)

And I still believe he was cheated out of at least one Oscar nomination, for The King of Comedy. He steals one scene after another right out from ROBERT DE NIRO. But because critics had already decided that he was “just playing himself,” his performance was written off as anything deserving of special reward. Right. Turn the camera on anyone and say, “Just be yourself” and see what you get…

So that’s it. Even though he’s still with us, no Jerry on Labor Day is almost like a death, or a premonition of one. So here’s to Joey Levitch, also known as Professor Kelp and Morty Tashman and Stanley Belt and Norman Phiffier and, of course, Herbert H. Heebert. I don’t care what the stupid critics say. He may not have been Chaplin or Keaton or even Jacques Tati. And he may not have been the most self-effacing fellow (few are in his business). But he certainly was what he intended to be: damn funny. And anyone who can make you laugh, really laugh, who can take you out of yourself, who can relieve you of the tensions and anxieties and pains of this life for just a moment or two, has a gift of transcendent power. And Lewis had that. And the world was a better place for it. At least mine was.