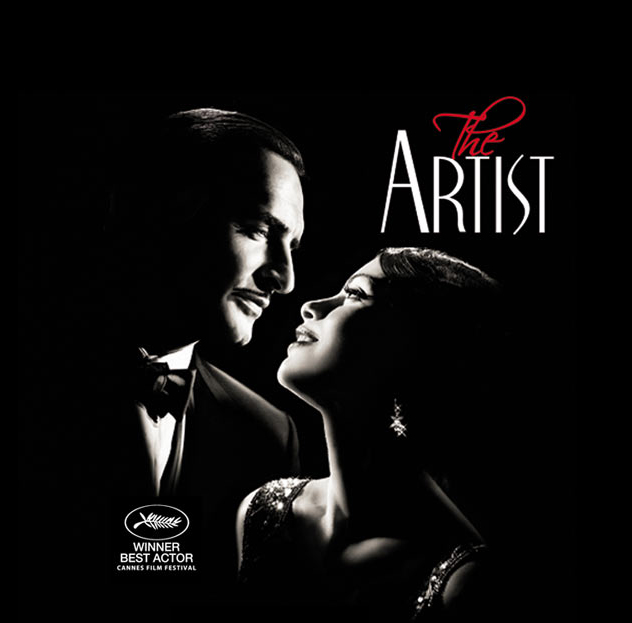 Great jumping dust bunnies! The way critics have fawned over this film, you’d think it had been a collaboration between Charlie Chaplin and F.W. Murnau only recently discovered in a vault somewhere, lovingly restored by Martin Scorsese and paired with an animated short courtesy of Pixar.

What a mildly amusing trifle—emphasis on mildly and trifle. A black-and-white* silent film that is an homage to silent films, with a retro aspect ratio to boot. Got it. A silent movie star (Jean Dujardin) in 1929 Hollywoodland finds his career in tatters with the advent of sound. A young former costar (Berenice Bejo) with whom he had enjoyed a serious flirtation goes with the technological flow and becomes a bigger-than-life screen goddess with her first talkie. Think seriously dumbed-down versions of A Star Is Born meets Singin’ in the Rain meets Sunset Boulevard meets about a half hour too long. (Seriously: This film would have been much more impressive if it had taken half the time to tell the same story.)

Never before have I seen a film so desperately in need of some comic relief—even though most of this melodrama is intended to be comical. How this overlong exercise in nostalgia could have used a Harpo Marx skitting across the frame, stealing a scene or two. There’s a giggle here and there, mostly because of a preternaturally charismatic doggie, but otherwise there’s neither wit nor originality to either the story or its illustration. Director Michel Hazanavicius composes his shots with all the visual elan of a series of court sketches. Yes, there’s the odd canted angle and playing with camera height in a couple of scenes, but otherwise his compositions make Jim Jarmusch look like Sergei Eisenstein.

The only saving graces are the performances by its two stars. Dujardin brings a Latin panache to his disaffected leading man, a second-rate Valentino kicking against the goads, who fears sound like some fear death (for a reason that becomes all too obvious in the film’s one genuinely charming moment, really a punchline). Bejo is a delight — light on her feet, with a winsome smile and airy appeal. Imagine a magical mix of Lena Horne, Irene Cara, Myrna Loy, and Thandie Newton. And yes, there’s Uggi, the almost-human pup. Normally, I resist cute pets in films like Hal 2000 resisted opening the pod-bay doors. But the dog comes close to achieving the kind of comic scene-stealing this film craved.

If the Academy is in a sentimental mood regarding Old Cinema, please please let them reward Hugo. As for you, my dear readers, if you want a taste of real silent genius, yes, there’s Eisenstein. And Sherlock Jr. And King Vidor’s The Crowd. If you want a really entertaining modern take on the silent film with a Latin twist, try Ettore Scola’s Le Bal. And there’s always Mel Brooks’ Silent Movie, with its manic energy and emphatic “No!” uttered by none other than Marcel Marceau.

As for The Artist, I wouldn’t go so far as to say, “Just say no.” It’s not a bad film by any means. At it’s best, it’s a one-off oddity, a distraction from the MI:4s. At it’s worst, it’s look-at-your-watch time. I certainly can’t imagine sitting through it again. I’m rather surprised I sat through it once.

*Actually, this is a study in gray. It’s impossible to reproduce the same texture of black-and-white films of, say, the noir era. Film stock and processing are simply not the same.

4 thoughts on “A Strange Review: The Artist”