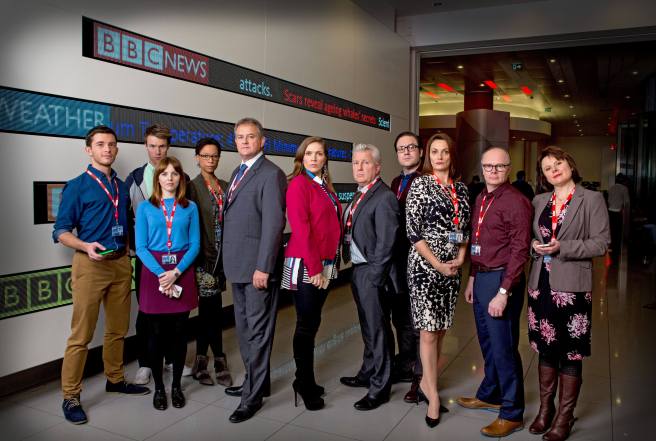 So I was rummaging through what’s new on Netflix and came across this gem of a Britcom I had never heard of before, and if you know me, you know that’s strange, because I love and adore Britcoms and pride myself on keeping abreast of all the great stuff I haven’t seen yet.

W1A stars Hugh Bonneville (of Downton Abbey fame) as the new “Head of Values” at the BBC. It seems that the Royal Charter is set to be renewed for the Beeb in 2016, but before that can happen the venerable institution has to figure out what it’s real purpose is in a digital age.

The dialogue is composed mostly of truncated vocables, half-sentences, unfinished thoughts, questions without answers, “Right,” “Brilliant,” all spoken, or spit out, by a lot of stressed-out producers and directors and interns who don’t know whether they’re coming or going if for no other reason than they’re constantly being interrupted by their cell phones, new reports they were supposed to have read via a new tablet-based super-app called Syncopatico, 11 years in the making, which, frankly, never works, and strategies no one can figure out because they are never fully thought through but nevertheless must be acted upon.

All the while there is a narrator setting the stage for that day’s source of conflicts, the who’s who among the nameless, and otherwise giving us backstory that, if you listen very carefully, amounts to delightful nonsense like “This person’s still here.”

The Beeb headquarters is a U-shaped glass palace where small conference rooms are dominated by grotesque B&W images of former BBC stars like Morecambe and Wise, the two Ronnies, and don’t be surprised if you walk in on Salman Rushdie and Alan Yentob arm-wrestling.

And that was just the first 20 minutes of the pilot, a substory of which focuses on the network’s bad press regarding rank discrimination within its ranks, which is very bad. The people demanding justice and redress of grievances, of course, are the Cornish, only four of whom were represented in the 2012 London Olympics—and they all lost. (One of the spokespersons for the Cornish cause is a BBC news reader who believes she has been discriminated against because of her “West Country” accent, which she doesn’t have, because she’s not Cornish.)

The tone of W1A is sort of anti-Armando Ianucci (The Thick of It, Veep), which is to say, it’s not about a bunch of vicious, self-seeking, foul-mouthed cartoons making each other’s lives miserable as they claw their way to the nearest john to throw up their anti-depressants. The W1A troupe don’t seem to know what it is they are seeking and are trying very hard to work with each other to find out before they all lose their jobs.

Their number one obstacle to achieving this goal, of course, is a common language, which no one seems to understand.

I know what I’ll be binge-watching over the Labor Day weekend, and it will probably be Twenty-Twelve.

3 thoughts on “A Strange Review: W1A”